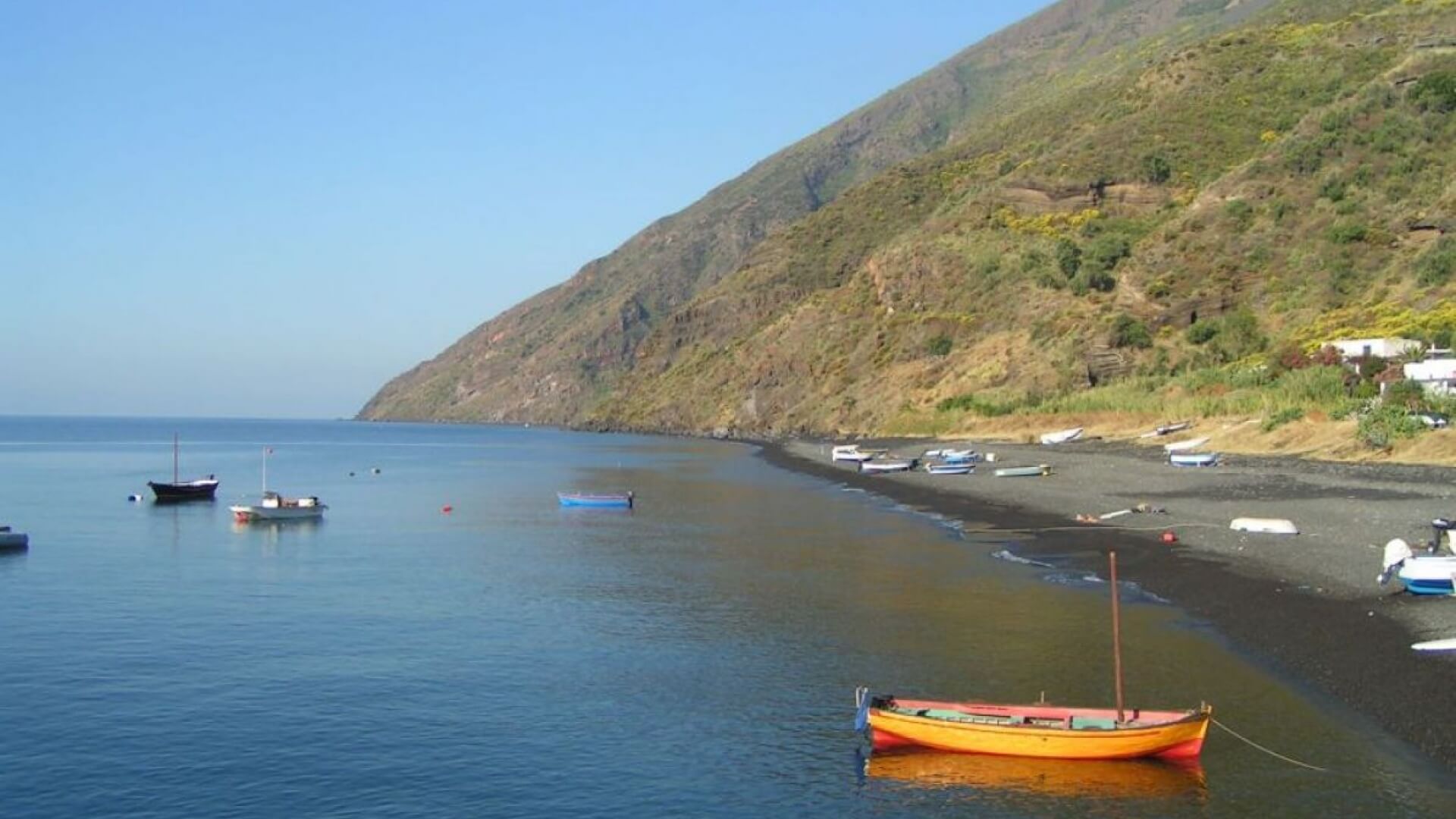 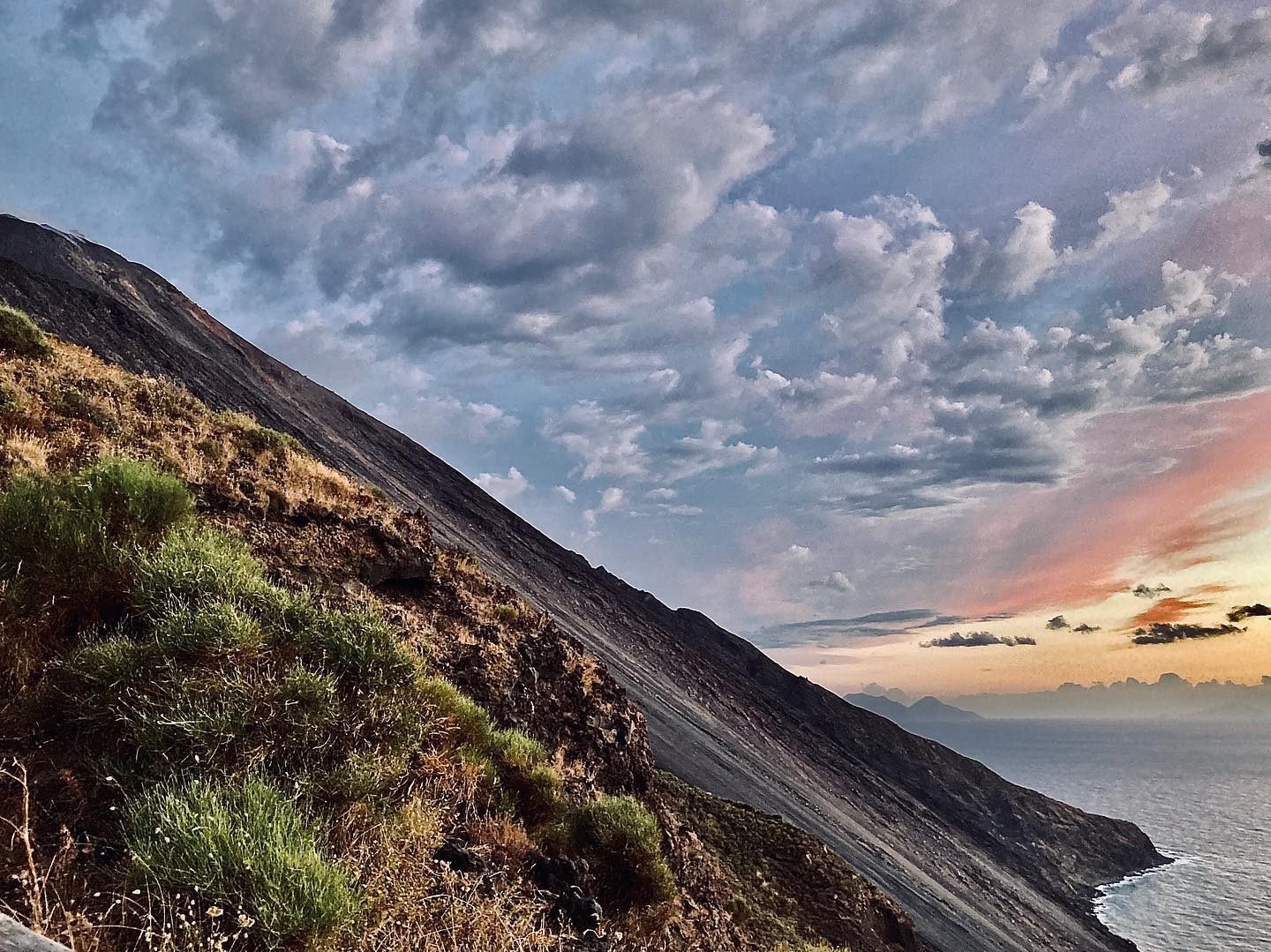 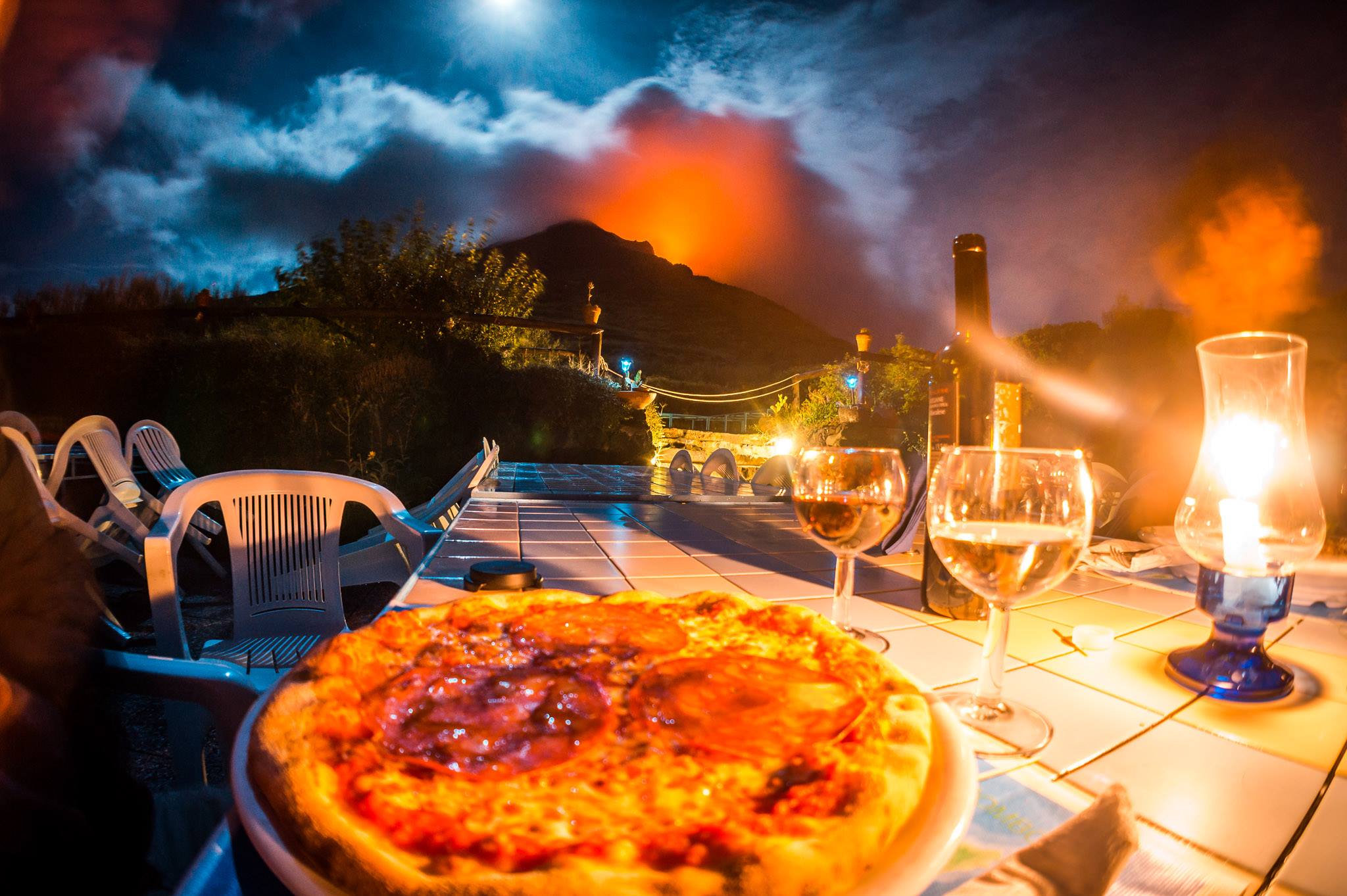 Trekking at sunset and pizza at the Observatory 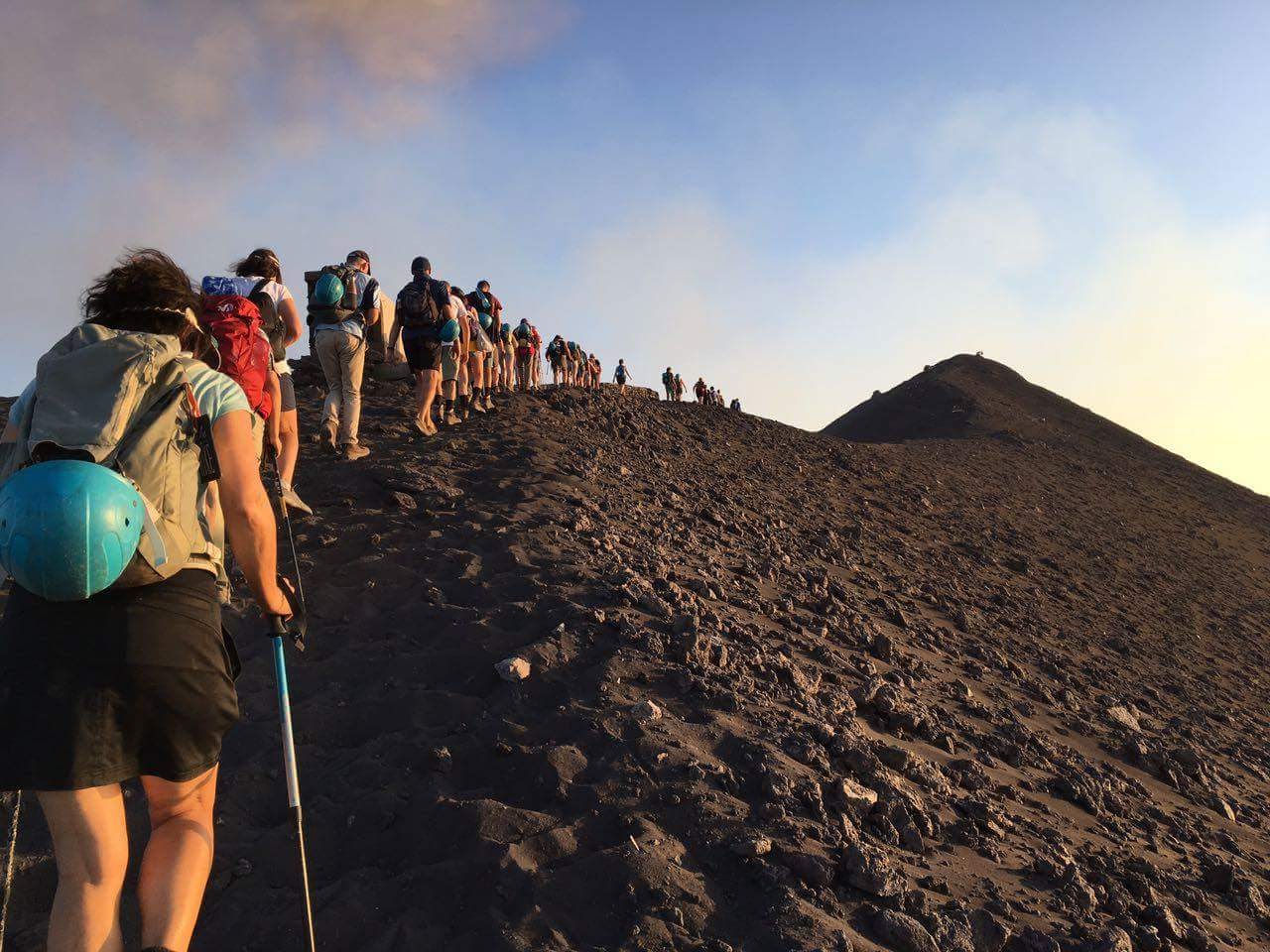 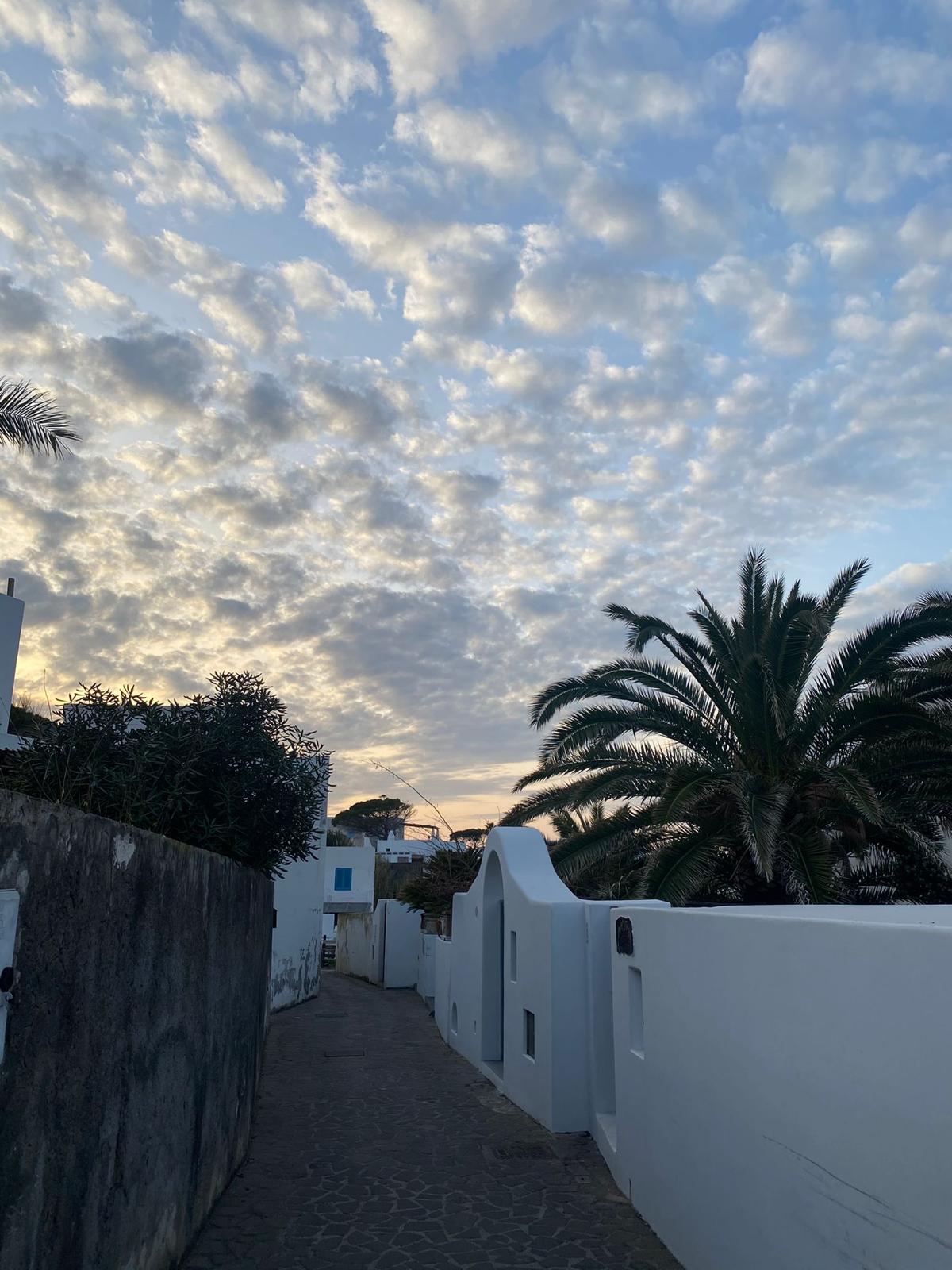 Guided tour of the country and Stromboli Visitor Center

Stromboli offers many opportunities for both hiking and trekking enthusiasts and for those keen on exploring the seabed.
For those unwilling to tackle the ascent to the volcano on foot, they can always enjoy the eruptions of the craters by booking a night boat trip to the Sciara del Fuoco, or choosing less steep paths to reach the Observatory.
The Walk to the Observatory
A fascinating hike along a mule track that starts from Piscità and goes beyond the street lights of Punta Labronzo, where the Civil Protection Department ;monitors, takes you closer to the crater. Punta Labronzo is the most easily accessible point from which to observe the Sciara del Fuoco, the steep slope on which the desolate and incandescent rocks spewed from the crater roll into the sea creating a swirl of black, impalpable and windswept powder.
You should be prepared for at least two and a half hour walk to and fro, from the town.
You can drive up to Belvedere, at a height of 290 meters above sea level, or you can continue to the summit of the volcano but you are required to be accompanied by a guide.

Trekking to the Volcano

It is possible to see the unique and exciting spectacle of the explosions from the panoramic Belvedere up to 400 meters.
The eruptions are especially impressive watched in the darkness of the night: we recommend the ascent in the late afternoon and the return at night. The duration is approximately 4 hours (round trip)
It is not compulsory to take the excursion with a specialized guide. we recommend standard hiking equipment; hiking boots are preferable to sneakers. It is possible to rent everything you need.

It is also necessary to bring 3 torches, a pair of long trousers, a bottle of water, energy food and a spare T-shirt.

Do not forget a light windbreaker as, going up in altitude, the temperature can drop.
The trekking excursion to Stromboli is a unique and fascinating experience that allows you to admire an incomparable natural spectacle.

Through a path of rare beauty, with unforgettable landscape views, you reach the sight of one of the few active volcanoes in the world.

The persistent explosive activity can be observed from the panoramic Belvedere: a succession of thunderous explosions that project incandescent lapilli into the air like fireworks.

The trail, designed for effortless walks without the accompaniment of guides, connects S. Vincenzo to Punta Labronzo through virgin areas of the mountain. It is possible to take an annular route, which returns to the stone road that connects Semaforo Labronzo to the hamlet of Piscità.
The trail averages a width of one and a half meters and ensues, mainly in the central stretch a range of altitudes that reach 200 to 250 meters on a bed of sand and rock that is only seldomly inclined.
To render the journey more pleasant and to enjoy the panoramic views and the shaded areas, the path is equipped with stop-offs with wooden tables and benches.
The beginning of the trail which starts at an altitude of 100m can be reached from Piazza S. Vincenzo along the road near the church.
Duration: 2 hours

Night Excursion to the Sciara del Fuoco (by boat)
If the water is calm, the boat trip which takes you to see Stromboli from the sea and admire the spectacular Sciara del Fuoco can be quite evocative.
The trip starts at dusk from the pier at Scari and the anchor is lowered in front of the Sciara del Fuoco, keeping a safe distance of at least 400 meters. From here you can watch the volcanic eruptions which, with an amazing regularity, spew out the flame red lapilli against the black of the night, creating magnificent natural fireworks (duration of approximately one and a half hours).

Boat Tour Around the Island

Boat Tour Around the Island

This is perhaps the best way to appreciate all the different aspects of this island. Departure from Scari in the morning (duration approximately 3 hours).
You can tackle the boat trip around the island either with a small hired boat (if you like to "do it yourself ") or with the guided tour (if you prefer to rely on expert sailors of the island). During the circumnavigation, a visit to the small village of Ginostra and a dip at Strombolicchio, where the blue of the sea takes on infinite nuances, should not be missed.
Those who want to enjoy the charm of Stromboli should, at sunset, meander along its many moonlit streets, and allow themselves to be enveloped by the aroma of the island.
Keep in mind that the streets of the island are devoid of electric lighting and hence, conserve all the rich flavor of Aeolian history.

It is a small island in the middle of the sea that juts out like a medieval castle, a kilometer and a half north of Stromboli. In 1926 a beacon was installed there to aid in navigation.
An ancient legend, passed down to us by oral tradition, narrates that Strombolicchio is nothing more than the cork of the Stromboli volcano launched into the sea by a violent eruption. It is actually a neck, that is to say, the solidified inner portion of an ancient volcanic structure which has been slowly eroded away by the waves and the wind. This ancient volcano, which has been dated to between 360 and 200 thousand years, probably constitutes the first phase of the geological evolution of the entire volcanic complex that, is the Stromboli volcano. Today Strombolicchio is home to a large solar-powered lighthouse.
A steep staircase of over 200 steps, partly cut into the rock, gives access to the plateau at the summit where you can admire the evocative view of Stromboli and the other islands. Even the depths of the sea are of great interest. An immersion along the very deep vertical walls of the cliff is unforgettable for the variety of plant forms that can be seen, from the Red Sea Fan to the extremely rare Horse Anemone. The waters off Strombolicchio teem with fish: brown or golden groupers, barracudas and lobsters, which in June rise to the surface to change their carapace.
Strombolicchio is the unspoiled paradise for divers and sailors.
Special attention goes to the Aeolian Wall Lizard (Podarcis raffonei) found on the island of Strombolicchio; it is of considerable importance in terms of insular fauna for it represents the only endemic species found exclusively in Italy.

On the south coast of the island you have Ginostra, an extraordinarily archaic small village that can only be reached by sea. With less than thirty residents, the village consists of a small nucleus of houses arranged within a natural amphitheater and is suspended about one hundred meters above the sea.
Up until a few years ago living here was prohibitive: electric lighting came only in 2004, the same year the dock for ships and hydrofoils was built. Before that, the disembarking of passengers and goods was achieved through rolling, or using a rowing boat that was shuttled from the ships to the dock. This procedure meant waiting for the right wave to enter into the cranny, the smallest port in the world with an aperture of a couple of meters. The town is built on the side of a hill and narrow lanes are interrupted by steps made of lava rock inserted amongst capers, olive groves and scattered houses. The only conceivable means of transport is that of donkeys. There is no sand in Ginostra; only rock. To swim you must go to the platform beneath the church, to the rocks or sea cliffs, or to the Secche of Lazarus.

Cinema Sites
Stromboli, also known as "Stromboli, terra di Dio" by Roberto Rossellini was shot in 1949 on the slopes of the homonymous volcano. It is one of the great masterpieces of Italian neorealism. Not only did the film make the island famous, it triggered off the greatest sentimental scandal of all times in the film industry, filling the pages of newspapers for months. Anna Magnani and Roberto Rossellini, until then the symbolic couple of Italian cinema, were struck by the cyclone of Ingrid Bergman’s Scandinavian charm. When he saw her, Rossellini wanted her as leading actress for the film. During the filming their love story gained in intensity, triggering off Magnani’s desire for revenge. Thus, while Rossellini and Bergman shot Stromboli, Magnani came to the Aeolian Islands with director William Dieterle, Prince Francesco Alliata and Panaria Film Studios, and made the movie Volcano (1949). The whole story is told in a humorous pamphlet entitled The War of the Volcanoes by Alberto Anile and Maria Gabriella Giannice.